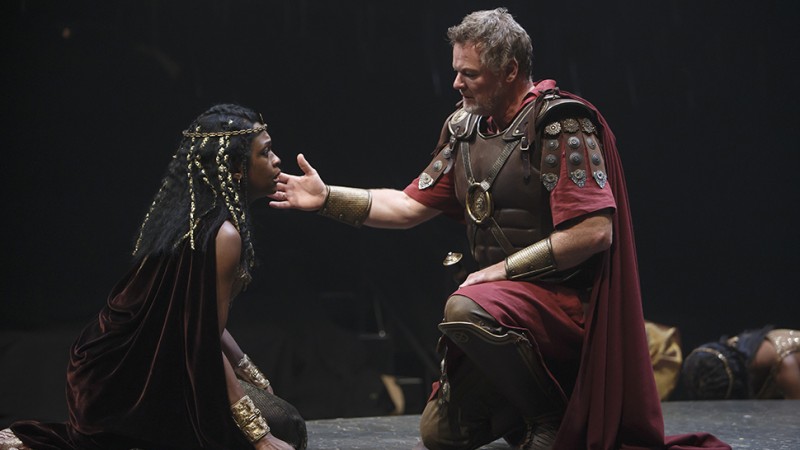 After the assassination of Julius Caesar, the Roman world is ruled by a triumvirate consisting of Octavius Caesar, Marcus Aemilius Lepidus and Mark Antony. Much to Caesar’s disgust, however, Antony is neglecting his political and military responsibilities – and his wife in Rome – as he dallies in Alexandria with Cleopatra, the voluptuous queen of Egypt.

Upon his wife’s death, Antony at last returns to Rome to help Caesar crush a rebellion led by Pompey. To patch things up between them, Antony agrees to marry Caesar’s sister, Octavia – news of which enrages Cleopatra. Pompey and the triumvirate declare a temporary truce, during which Pompey passes up the opportunity to kill all three of the Roman leaders at a shipboard banquet.

When Antony, unable to endure his separation from Cleopatra, returns to Egypt, Caesar attacks and defeats Pompey, imprisons Lepidus and challenges Antony to a battle at sea. Antony’s side loses the fight when Cleopatra’s ships retreat, and in a subsequent engagement the Egyptian fleet surrenders altogether.

Antony accuses Cleopatra of betraying him, whereupon she sends him word that she has killed herself. Hearing this, Antony falls on his sword and is mortally wounded. He is taken to Cleopatra, and they pledge again their undying love before Cleopatra sends for a poisonous asp with which to end her own life.

Antony and Cleopatra was captured live on stage with a full audience at the Stratford Festival’s Tom Patterson Theatre on September 25, 2014, using 10 high definition cameras and 128 tracks of sound to create a lush, surround-sound experience.