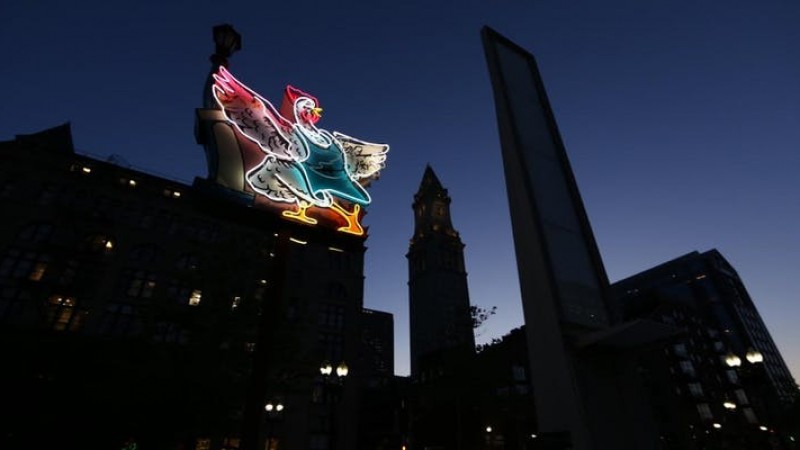 A lively exploration of the past and present of large-scale light projects in the Bay State. Please join the Greenway Conservancy for a free, public panel discussion exploring the histories, lessons and relevance of electric light to our experience of highways, parks and shopping plazas. GLOW, the current exhibition of eight historic neon signs from across Massachusetts with contemporary light-based artworks on The Greenway will serve as the starting point for an intriguing conversation between historians, artists, collectors and museum professionals. Historian Victoria Solan will moderate a discussion with some of today’s most innovative leaders in the field, revealing how present-day thinking about light can create open, inclusive spaces for all of us to enjoy. The conversation is sure to spark new thinking about technology, creativity and the shared legacy of our built environment. Our Panelists Lizabeth Cohen Lizabeth Cohen is Dean of the Radcliffe Institute for Advanced Study at Harvard University and the Howard Mumford Jones Professor American Studies in the Department of History. She is the author of Making a New Deal: Industrial Workers in Chicago, 1919-1939 (1990, new edition with new introduction 2008; Canto Classic 2015), winner of the Bancroft Prize and a finalist for the Pulitzer, and A Consumers’ Republic: The Politics of Mass Consumption in Postwar America (2003). Her interests have recently focused on urbanism and the built environment. Lizabeth is currently finishing a new book, Saving America's Cities: Ed Logue and the Struggle to Renew Urban America in the Suburban Age (Farrar, Straus & Giroux, forthcoming 2019), which explores the rebuilding of American cities after World War II by following the career of a major figure in urban renewal, Edward J. Logue, who worked in New Haven in the 1950s, Boston in the 1960s, and New York City and State from 1968-1985. During academic year 2007-8, Liz was the Harmsworth Professor at Oxford University and she is an elected member of the American Academy of Arts & Sciences. She received her A.B. from Princeton University and her Ph.D. from the University of California Berkeley. She has consulted widely on museum exhibitions, documentary films, and many other public history projects. Sean Gallero: Luftwerk Luftwerk explores light, color, and perception in immersive, experience-based installations. Focused on the context of a site for each project, Luftwerk uses new and emerging media to apply their own interpretive layer, integrating the physical structure, historical context, and embedded information into each piece. Since founding in 2007, Petra Bachmaier and Sean Gallero have amassed a significant body of work ranging from site-specific, immersive installations to experimental projects that interpret data. Victoria Solan Consultant Historian to GLOW, Victoria Solan is an architectural historian, writer and editor who currently lives in Ottawa, Ontario. A former resident of the Boston area, Victoria has taught at Tufts University, the University of Chicago and Wheaton College. Victoria has also served on the board of the New England Chapter of the Society of Architectural Historians, supervising the awards of fellowships to area graduate students. Victoria, who holds a Ph.D. in the History of Art from Yale University, is particularly interested the layers of meaning which Americans ascribe to their everyday environment and is looking forward to reading and hearing vistors' reactions to GLOW. Dave Waller Dave Waller grew up in a family of collectors, so when he and his big ten-year-old brother Mikey brought some old signs home from the dump, their Mom wasn’t surprised. Neon was old-fashioned, and signs were coming down faster than Dave could gather them. As a tinkerer and lover of old things, Dave and his graphic designer wife Lynn opened up a Visual Effects company called Brickyard, named after the working class neighborhood in Lynn, MA where his great-grandparents settled in the days of immigration. As more signs piled up, they needed new places store them, so today you’ll find several restaurants in New England graciously providing wall space to show more of the collection. So why old neon signs? For Lynn, its the lettering and graphic design. For Dave, it’s first rescuing, then transforming them back into working condition. “For a long while they were regarded as an eyesore” Dave explains. “But now people really seem to enjoy their warm glow again”. Cynthia Warso Cynthia currently leads educational and arts initiatives, research, curatorial strategies and exhibitions at the Neon Museum in Las Vegas. Cynthia is also a freelance art writer, taught Art History at College of Southern Nevada and UNLV, and has served on the Board of the Nevada Museums Association. Cynthia is currently enrolled in the Executive Program for nonprofit leadership in arts and culture strategies at the University of Pennsylvania. She earned her B.A. in Anthropology and M.A. in Art History from Northern Illinois University, receiving an academic fellowship in Foreign Language and Area Studies for Burmese language. Her research specialty is Southeast Asian Buddhist art, architecture and urban centers. At the Neon Museum she has been involved in sign restorations and public art through several community partnerships, including the National Scenic Byway and the Las Vegas Signs Project. Run of Events 5:30 - Doors Open 6:00 - Panel Discussion 7:00 - Audience Q&A 7:20 - Closing Remarks This panel is free and open to the public. Registration is required but attendees are not required to present tickets for entry. Invite others, and share your experience online with our tag #GreenwayArt! This event will be held in the Black Box Theatre at the Boston Center for the Arts.