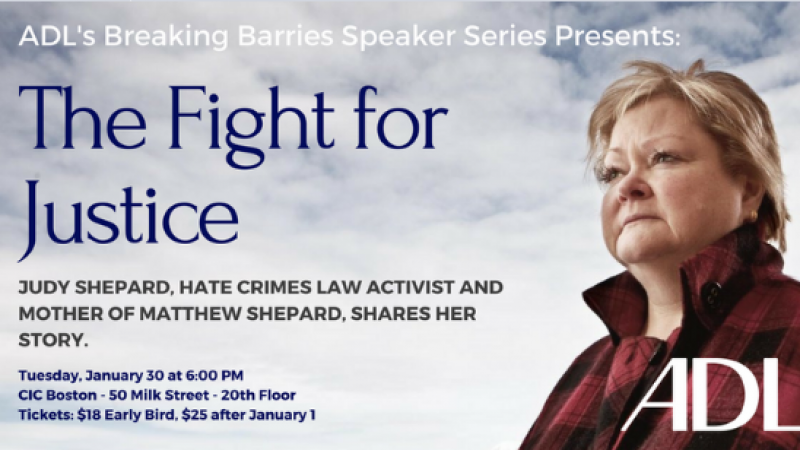 On October 7th, 1998, Matthew Shepard was killed in what came to be one of the most high-profile cases highlighting hate crimes against LGBTQ people. His mother, Judy, became one of the most vociferous activists in the country. Her work and determination led to the passage of the Matthew Shepard and James Byrd, Jr. Hate Crimes Prevention Act (HCPA) which expands federal hate-crime protection to include crimes motivated by a victim's actual or perceived gender, sexual orientation, gender identity, or disability. Join us to hear her story.

What to expect at this event:
There will be a brief networking reception beginning at 6:30 pm followed by a conversation between Judy Shepard and ADL New England's Regional Director, Robert Trestan. Time will be reserved at the end to take questions from the audience. Light appetizers and soft drinks will be served.

About ADL's Breaking Barriers Speaker Series:
Breaking Barriers is ADL New England's speaker series. ADL invites engaging speakers to discuss topics that are relevant to ADL’s mission to "stop the defamation of the Jewish people and securing justice and fair treatment to all." Past speakers have included Willie O'Ree (the first black player in the NHL), Kathrine Switzer (the first woman to run the Boston Marathon), and Megan Phelps-Roper (former member of the Westboro Baptist Church). This winter, Judy Shepard will share her story.