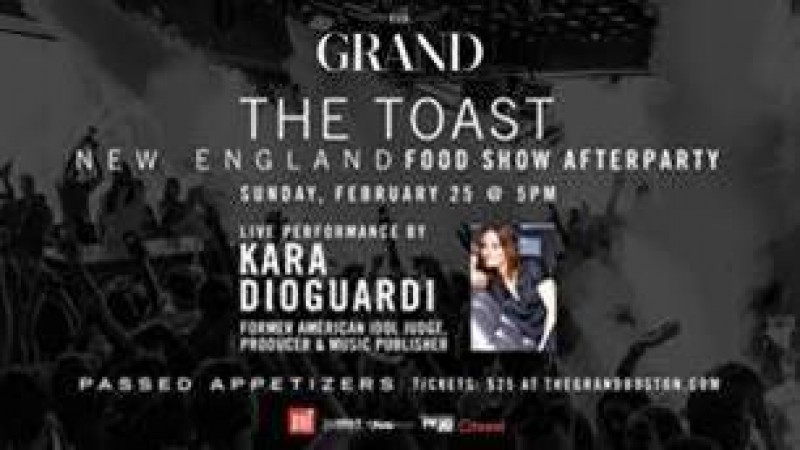 On Sunday, February 25th, 2018 beginning at 5 pm, the Massachusetts Restaurant Association (MRA) will host “The Toast,” an event celebrating the commencement of this year’s 2018 New England Food Show at Seaport’s newest glamourous nightclub The Grand Boston. Toast to the restaurant industry’s best as guests enjoy complimentary passed appetizers from The Grand and a live performance from former American Idol judge and Grammy-nominated songwriter, Kara DioGuardi.

Kicking off the night at 5 pm, restaurant owners, chefs, service personnel, back of house staff as well at the industry’s business partners and general public can mix, mingle, network and exchange stories about the trials and tribulations encountered in everyone’s favorite industry at this lively celebratory event. Included in the $25 admission ticket, guests can enjoy delicious passed appetizers and a cash bar will be available. Kara DioGuardi will give an exclusive performance, not to be missed! As one of the most successful contemporary songwriters in the world, Kara’s songs have appeared on more than 160 million albums. She has had over 50 charting singles with artists such as Pink, Christina Aguilera, Kelly Clarkson, Carrie Underwood, Katy Perry, to name a few. Kara was also a judge on seasons 8 and 9 of the hit FOX show “American Idol. Don’t miss this opportunity to celebrate alongside the best of the industry during the official after party of the New England Food Show.