Downtown Boston’s major historic sites, places like the Granary Burying Ground, Old State House, and Old South Meeting House, attract hundreds of thousands of visitors a year, many of whom take advantage of the Freedom Trail Foundation's lively and informative guided tours.  But what about Downtown’s “hidden gem” historic sites?

Often, they are no more than a plaque on an alley wall—but the history they commemorate is no less fascinating and compelling than that showcased at more famous sites. So come take a journey off the beaten path, to explore the historic sites that are tucked away on the side streets of downtown.

Begin in Spring Lane, the secluded alley that slices between Washington and Devonshire streets. Here is where Boston literally began—the “Spring” in “Spring Lane” having been the original source of fresh water for Boston’s first settlers, the Puritans. At this exact spot, in 1630, the tiny settlement of Boston was born. A plaque on the side of the alley supplies details.

After exiting Spring Lane onto Washington Street you'll see the Old Corner Bookstore at the intersection of Washington and School streets. The building, constructed in 1718 by Dr. Thomas Crease, was his home and apothecary shop. It later housed a number of booksellers and publishers, the most famous of which was Ticknor and Fields, publishers of many well-known American titles including Thoreau’s "Walden," Hawthorne’s "The Scarlet Letter," Alcott's "Little Women," Beech Stowe's "Uncle Tom's Cabin," and the Atlantic Monthly. In 1960, a group of Bostonians, concerned about the impending loss of an important piece of the city’s architecture and heritage, formed Historic Boston Incorporated (HBI) as a non-profit organization and pooled their resources and connections to acquire and restore the building for continued use as retail shops and commercial offices. Then head uphill on School Street, turn left on Province Street, and stop at the brick retaining wall beneath the Marliave restaurant’s patio. You’ve just stumbled across Governor’s Alley. Here was the residence of colonial Boston’s British governors—until General Washington drove out the redcoats. The Governor’s Alley plaque, in a gesture of goodwill, commemorates the British governors who ruled over colonial Massachusetts as well as the modern-day
governors of the state.

Next, turn left on Bromfield, right on Washington, and left onto Milk Street. At the entrance to One Milk Street, look up to gaze the bust commemorating The Birthplace of Ben Franklin. Here, in 1706, Ben Franklin—printer, scientist, revolutionary, diplomat, philosopher, and considered by many the first true “American”—was born. 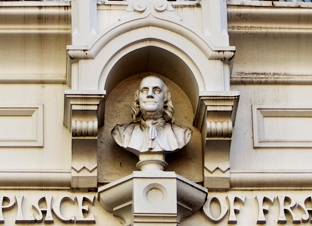 Turn right onto Hawley Street, cut under the 33 Arch Street garage, and come to the corner of Hawley & Arch Street. Here, at 45 Franklin Street, adjacent to the Millennium Tower development, once stood Charles Bulfinch’s Franklin Place development. Although most famous for his design of the Massachusetts State House, Bulfinch, in the 1790s, developed a luxurious townhouse complex that accentuated Franklin Street’s graceful curve. It was Boston’s most fashionable address until the modern commercial district overtook it starting in the 1860s.

Just a few more stops! Head two blocks down Franklin and turn right onto Devonshire. Mounted on the side of 100 Franklin Street is a plaque honoring “The Vault,” the group of Boston civic and business leaders who met inside the building, back when it was the Boston Stock Exchange, to help guide the city’s development.

Cut back across Franklin Street and continue a block down Devonshire. Here, in leafy Winthrop Square, beneath the Financial District’s soaring skyscrapers, stands the statue of Robert Burns, the legendary Scottish poet, who wrote the song "Auld Lang Syne" and is thought by many to be the national poet of Scotland. But wait—shouldn’t John Winthrop, the founder of Boston, be the one honored with a statue in what is his namesake park? There’s a story behind that. Last call: cut through Winthrop Lane and pause briefly to admire the Boston Bricks Trail that is underfoot. Take a right onto Arch Street, then left back onto Franklin Street until Washington Street. Go right on Washington Street for two blocks, until you are back where you began, at the entrance to Spring Lane. This time, look up. You are staring at The Winthrop Building (278 Washington Street). Built in 1894, it was Boston’s first steel-frame office building—the city’s original skyscraper! Added to the National Historic Register in 1974, it was done in the Renaissance Revival architectural style. Directly across the street from the Winthrop Building is the Boston Irish Famine Memorial, dedicated in 1998 and commemorating the event which forever changed the character and complexion of Boston life. The arrival of tens of thousands of Irish refugees to Boston starting in the 1840s, and the cultural legacy they spawned, has reverberated down through the centuries. There are many, many more hidden gem historic sites in Downtown Boston—the ones described here are just a small (but representative) sampling. So head to downtown and start exploring!

(First image at top courtesy of the Freedom Trail Foundation)

Listings in this Itinerary

Add all listings to itinerary