Congratulations to the BID's New Board of Directors

The BID would like to congratulate new BID officers who were elected during Monday's Board of Directors meeting at the Ritz-Carlton Boston Common. Jack Spurr, president and CEO of A.W. Perry, was elected chairman of the board. Joe Larkin, Boston Managing Principal for Millennium Partners, was elected vice-chair. Bill Cowin, a Downtown Boston resident and Managing Director of Tallage, was elected treasurer.

We would also like to thank outgoing chairman of the board John Rattigan, Managing Partner of DLA Piper, for his years of service to the BID and the Downtown Boston community. 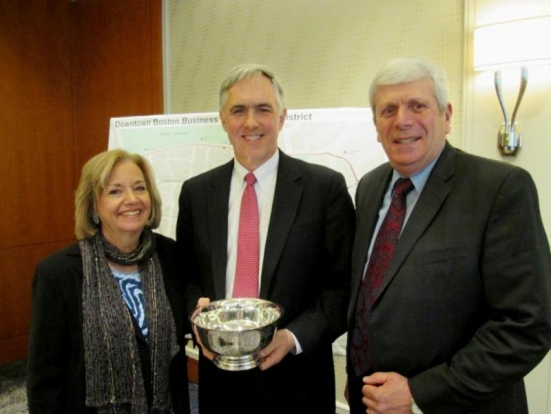 John H. 'Jack' Spurr, Jr. joined A.W. Perry in 1982, and became president and the company's chief executive officer in 2004. He is responsible for the overall direction of the Company and maintains direct oversight over property management. Jack is a past president of the Greater Boston Real Estate Board and of Building Owners and Managers Association (BOMA) Boston and immediate past chair of the South Shore Chamber of Commerce. He is an active principal of TR Advisors, a company affiliate that provides real estate consulting and asset management services to the MBTA and other public transportation entities. He currently serves on the Boards of Directors of Independent Bank Corp., the Boston Municipal Research Bureau and the South Shore Chamber of Commerce. Prior to joining Perry, Jack had a career as a Certified Public Accountant. He received a Bachelor of Arts from St. Lawrence University and an MBA from Cornell University.

William P. Cowin is the managing director for Tallage. Prior to Tallage, Bill co-founded B&B Ventures, a Boston-based real estate investment company for high net worth investors.  Prior to B&BM, Bill worked for seven years in the Fidelity Real Estate Group, a unit of Fidelity Investments. As an Investment Officer his responsibilities included sourcing, underwriting, closing and management of private real estate investments for an $875M private equity fund. Bill was the lead investment officer or analyst in the underwriting and closing of more than $1B of real estate investments across asset classes. Bill graduated summa cum laude in earning a B.A. in political science from The George Washington University and with honors from the Wharton School of the University of Pennsylvania where Bill earned his M.B.A. in finance and real estate. Bill is active in the Muscular Dystrophy Association co-hosting an annual fundraiser.

Joseph A. Larkin is the Boston Managing Principal for Millennium Partners, the successful national real estate firm headquartered in New York City engaged in mixed-use real estate developments in America's Gateway Gateway Cities. Prior to his redevelopment work, Joe worked with Westinghouse Credit Corporation's Real Estate Investment Unit. Joe is a graduate of the University of Massachusetts-Amherst and Boston University and has been a member of the Board of Directors for the Downtown Boston BID since its inception.