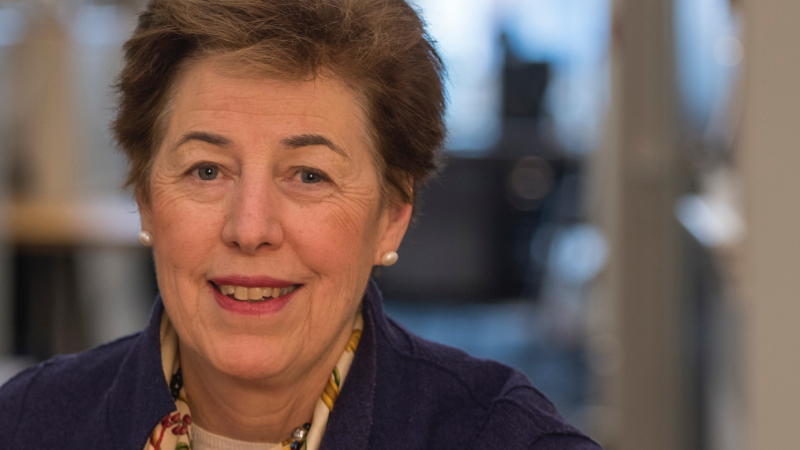 I think you get progress when you bring people together who can offer those different viewpoints, and the BID does that"

As an architect, Ann Beha is a particularly keen observer of her downtown Boston surroundings, and she delights in the mix of old and new that give the district so much character.

She likes that smaller buildings built for commercial enterprises after the Great Boston Fire are preserved among newer buildings and glass skyscrapers. These buildings, including her own office on Kingston Street, are a reminder of what the city once was and its mix of uses, says Beha, founder of Ann Beha Architects, or ABA, which originally was housed in her former Province Street home. It moved to its current location more than 30 years ago.

Beha is one of four principals of ABA, with Steve Gerrard, Tom Hotaling, and Phil Chen, who now is the president and principal owner. These four—and many others—have teamed up over time to build a practice that encompasses planning, design, and historic preservation.

Beha personally admires a range of styles and periods.

“If you look at the nineteenth-century Old City Hall, its preservation was never a foregone conclusion, and it took remarkable advocacy for that building to be preserved and to be renewed,” she says. “It’s a wonderful building.”

Beha also is a fan of the oft-maligned “new” City Hall, which in 1968 replaced the 45 School Street building as Boston’s seat of government.

“It’s a highly provocative piece of architecture and a powerful statement of commitment to architecture. Certainly it has its challenges, but I think it already has stood the test of time,” she says. “I’m excited about the upgrades to the plaza.”

One area of downtown change over the past 20 or 30 years is the addition of small parks on Summer Street, in front of the Surface Artery, and in Chinatown—some of which incorporate public art. Beha says these additions make the area friendlier and more hospitable.

“Those outdoor spaces are absolutely critical. Their maintenance and their human scale are a big asset to downtown, and the BID has had a lot to do with that” by promoting safety and encouraging the development of those spots, she says.

ABA occupies all but one floor of a five-story Kingston Street building that she describes as a “classic Industrial loft building.” The heavy-timber-frame building has a limestone façade and was used for light manufacturing. The architects shared the condominium building with trophy and tailor shops in the beginning, and an exploration of the upper floors revealed the remains of a hat-fabrication business.

“Kingston Street is only two and a half blocks, and it has five-story buildings in an area that has much taller buildings,” says Beha. “It’s a little pocket of history, that street.”

The architectural firm is a member of the U.S. Green Building Council and has signed on to the American Institute of Architects’ 2030 Commitment to reduce energy consumption in the built environment. It has designed LEED platinum, gold, silver, and certified projects.

Its headquarters was built long before current sustainable design practices came into play, but Beha notes that keeping an older building is in itself an act of sustainability.

“Altering it in a sensitive way so that you keep its interior and retain materials is another sustainable strategy.” For example, having the original operable windows allows for fresh air during certain seasons. “That’s commonsense sustainability, and then there are the materials you’re using and their longevity. Unlike a lot of tenant fit-outs, our renovations have stuck.” says Beha. “Things we did 25 years ago are still in place.”

Moreover, behavior matters, and she notes that an internal survey before the pandemic showed that the firm’s 45 employees travel to work on foot, bicycle, or public transit.

BID is a reassuring presence

Ann Beha Architects is located next to “a very important mission that serves human needs on a daily basis as an overnight stopping place: Kingston House.”

Beha notes that Kingston House is a good neighbor and invaluable to its community, and she is impressed that the Downtown Boston Business Improvement District is so supportive of the mission.

“The BID has taken on the social services aspects of the area as it serves the business residents and the growing residential population,” she says. Beha—and other businesspeople she talks with—find it reassuring “just knowing that the BID is there, having the awareness that there is an organization that can respond and is advocating for all of the residents and users of this area.”

When her office first opened on Kingston Street, it was a dark area at night with incidents that were concerning.

“Now everyone at ABA knows that if they’re working late and they want an escort or are concerned, there’s a BID number they can call,” says Beha. “We all know that if we have a problem in our neighborhood we can discuss it in greater detail with the BID than we might be able to with other groups. Most urban problems require different points of view to be considered. I think you get progress when you bring people together who can offer those different viewpoints, and the BID does that.”

The BID’s work in creating a clean and safe area has brought more visitors to downtown, says Beha. “There are plants and trees and music, and these outdoor events that the BID has sponsored have been a lot of fun, with plenty of energy. It’s a smart move that keeps the area vibrant and also young. It’s important that all ages feel welcome. I love that. I’m a huge fan and very, very appreciative.”

The U.S. State Department is an ABA client, and Beha is brushing up on her French as she engages in design work for the U.S. Embassy in Paris. But the firm also is in demand locally and is working on projects with the Old State House, the Boston Athenaeum, the Museum of Fine Arts, and others.

“The historic resources give the downtown area a tremendous amount of its quality and specialness,” says Beha. “We want to make sure the historic sites are valued and open to all. The Old South Meeting House does a great job with concerts and lectures for the public, and King’s Chapel as well.”

“It’s great to see these historic resources in the downtown area thinking about the twenty-first century audience and what they can do to contribute to the cultural life of the city as well as the downtown vitality.”

A hub of architectural talent

Boston is respected on the national and international scene as a place that has deep roots in architectural talent, according to Beha. There are six degree-granting architecture programs in this area, and Boston-area architects are considered to be extremely well trained, international, and diverse.

Beha and her colleagues enjoy that Boston inspires confidence in clients across the nation and world, and yet their hearts also belong to the city and its people.

“I love our work for the State Department; I love our work for the Smithsonian; but I also love working here in Boston for small community groups and for larger institutions,” says Beha. “It’s a really fulfilling buffet, a cornucopia of intellectual engagement. The thing I like best…is the desire our clients have to make life better, to move forward their areas of expertise and interest, and the cultural gain, the inclusivity.”