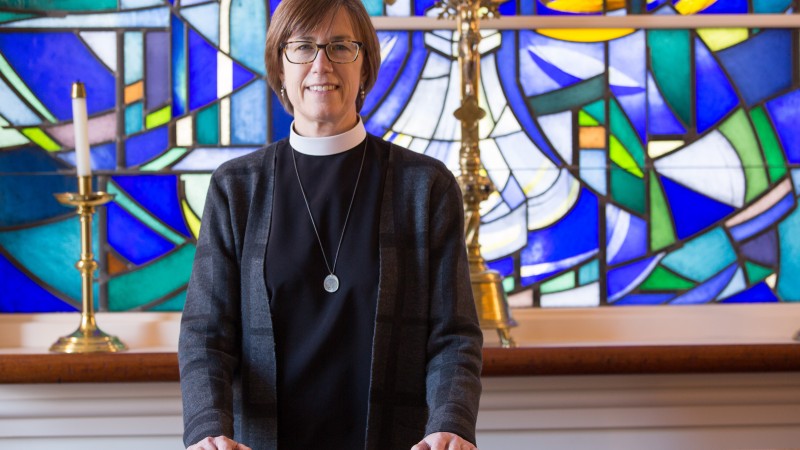 Building A Sense Of Community"

The profile below is part of a series the Downtown Boston BID is running honoring Women's History Month. Additional profiles of dynamic women in the BID area are available to read in the Business Profiles section.

As a college student, Amy McCreath studied politics and Russian studies with thoughts of working to help end the Cold War through a career in the State Department. But her concept of how she might best serve others changed when she became absorbed in learning about another intractable problem of the 1980s: apartheid in South Africa. South African Bishop Desmond Tutu’s efforts to create a just society in his nation inspired McCreath to enter the Episcopal priesthood.

“His message was so compelling. Here was this man who was in this terrible situation . . . and yet he had this vision of a post-apartheid South Africa that was so clear to him,” says McCreath. “It really taught me to rethink what the church was for and to rethink what it meant to be an ordained minister. I realized that a lot of the calling was about connecting the values of the church and the vision of the church with the needs of the world and playing a public role.”

So McCreath entered the Episcopal seminary and, following leadership roles at the parish and diocesan levels and a posting as Episcopal Chaplain at MIT, the Very Rev. Amy McCreath was named dean of the Cathedral Church of St. Paul in 2018.

A Tradition of Welcome

The cathedral’s history demonstrates its longtime efforts to reflect its surrounding community and meet its needs.

The Cathedral Church of St. Paul was founded as church in 1820. In 1912, Bishop Lawrence transformed it into a cathedral. He intentionally chose to situate it at the intersection of Boston's political and financial life, where working-class immigrants, the elite "Brahmins" of Boston's Beacon Hill neighborhood, and tourists all congregated.

“Bishop Lawrence had a vision of the cathedral being a place where all these people could be in dialogue with one another and learning from one another and worshiping with one another,” says McCreath. “From the very beginning his vision was for it to be a house of prayer for all people, not just Episcopalians.”

More than a century later, the cathedral’s warm environment is obvious to passers-by on Tremont Street. They are welcome to join staff and volunteers in the many activities they offer on the cathedral's plaza, including chess, bingo, and art projects. The cathedral also has embraced the presence of organizations such as the League of Women Voters and a nonprofit organization supporting a referendum on transgender rights.

“One thing we do is to project our mission out and down the steps and onto the plaza,” says McCreath. Even when the pandemic curtailed many activities, the cathedral was able to adjust to safely interact with the public outside its front door during the summer of 2020.

“It was so great because there was so little going on . . . but people would stop and talk and were so thankful to have a moment of encounter and joy. It was really beautiful,” she says. “We’re using the plaza to interact with anybody who comes by, but also to claim that space for the values that we hold and to discourage negative behavior.”

With the encouragement of the BID, the cathedral successfully applied a few years ago for a Boston Summer Eats grant, a program aimed at ensuring that no children go hungry in Boston over the summer.

“We worked in partnership with the BID to run that program, and some of the BID Ambassadors came and volunteered,” says McCreath. “I can’t say enough about the Ambassadors. They’re just terrific. They help keep the area clean. They let us know when they see problems. They partner with our staff to figure out why things are happening and develop solutions.”

The cathedral includes three congregations, one of which, MANNA, is composed of unhoused cathedral members.

"The cathedral has a strong commitment to working with unhoused people in the neighborhood, of which there are many,” says McCreath.

The MANNA, or Many Angels Needed Now and Always, congregation engages in a writing program, where members compose poetry and essays; offer public readings in partnership with the Boston Public Library; and participate in a leadership group that includes a circle for conversation and mutual information sharing. The latter has led to the BACHome—Boston Advisory Council on Ending Homelessness—program, through which people experiencing homelessness advise the Mayor’s Office on policy that affects them.

“The idea is that their voices really matter, and they and everybody bring skills, bring real gifts,” says McCreath. “It’s just harder to surface them when someone’s dealing with chronic homelessness.

She emphasizes  that the MANNA ministry is not an outreach program; participants are members of the congregation.

Inspired By A Milestone In St. Paul’s History

The cathedral always has preached justice and been involved in activism, but last year, as it celebrated the 200th anniversary of its founding as a parish, St. Paul’s began interrogating its own history and how it creates community, says McCreath. The cathedral adopted a strategic plan that commits it to becoming an anti-racist institution while also addressing other areas of its mission.

Because many Bostonians, including church founders, dealt in the textile industry, they were connected with the Southern plantations that depended on slave labor. And the pillars in front of the cathedral are carved from stone quarried by slave labor in Virginia.

“That kind of thing matters; that’s part of our story that needs to be told,” says McCreath. “We’re sorting through what that means.”

The cathedral is working with equity consultants to ensure that areas such as financial investments, hiring practices, and leadership and staff training have consonance with its mission.

“The strategic plan is more clear than ever about how much we want to be in the neighborhood,” says McCreath. “It’s such a rich neighborhood. The diversity, resources, and possibilities within a one-mile radius of the cathedral are extraordinary. We hope very much to convene people from different sectors of that neighborhood so that they can get to know one another and build a sense of we, have a sense of we—people from different parts of that community.”

Even after more than a century, the cathedral under McCreath’s leadership appears to have a focus very like the original one that brought together the many segments of Boston society

“I like to believe that Bishop Lawrence is cheering me on,” says McCreath.