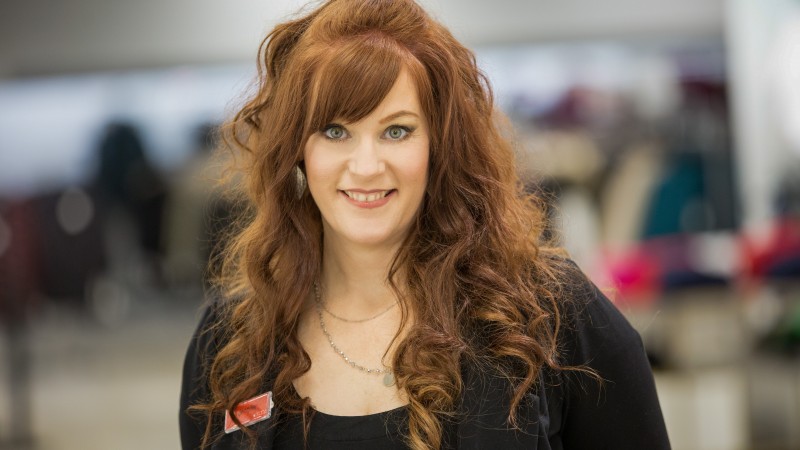 The City I Love Most Is Boston"

The profile below is part of a series the Downtown Boston BID is running honoring Women's History Month. Additional profiles of dynamic women in the BID area will soon be published.

“When you find something you like, stick with it.”

That was the advice Jennifer Dietzway’s dad, a Baltimore City Police officer for 30 years, gave to his seven children. Dietzway has followed it in journeying from a part-time holiday job at Sears Roebuck in Baltimore when she was a teen to her present position as store manager for the downtown Boston Macy’s.

Dietzway rose through the ranks and into Sears management positions by the time she was in her 20s. She worked in New York City, Long Island, and Burlington, Mass., eventually returning as the general manager of the Baltimore Sears store where she had begun her career.

“What a homecoming that was. These people who had been working with the company for 20 years, 30 years saw that same teen-age girl who started with that sparkle in her eyes come back as their leader.”

Eventually former colleagues persuaded her to join them at Macy’s.

“I saw many of my mentors and great leaders at Macy’s and took the greatest career risk of my life,” she says.

Having worked in Baltimore, New York, Boston, and other cities, she declares: “The city I love most is Boston,” which she sees as “that beautiful, clean city.”

Dietzway had never before worked with a business improvement district before coming to Boston, and the benefits it offers to the downtown commercial scene have been an eye-opener.

“I think our Downtown BID does such an incredible job, really taking pride in the city and keeping the streets clean.”

But what really sets the BID apart for Dietzway is its focus on communication. “That’s the key to any great partnership,” she says.

“Because we have two-way communication, we’re really working together to find out what’s important. How’s the foot traffic? What’s Macy’s got going on? (BID President Rosemarie Sansone) is always making sure that I know the latest developments and what people I should connect with.”

Dietzway isn’t one to retire to her office. She’s out and about in the store greeting customers and working with colleagues. She also enjoys seeing the merchandise.

“I love to shop for certain things. When you work for the greatest store in the world…I probably have certain areas where I spend more money than I should. Number one: designer handbags. I love handbags.”

She also likes to shop in Macy’s “candy store” of cosmetics, and her third interest is cookware, because she enjoys baking and cooking delicious meals when she’s home with her husband and two children.

The Macy’s Boston team has adopted its own brand, “A Boundless Boston.”

“We want to do all that we can as a work family and a store team to strengthen the community where we live and work. Giving back is one of our core values. We are dedicated to showing up for our customers every day and especially supporting the causes that mean the most to them,” she says.

The effort encompasses everything from in-store and online events—such as virtual makeup classes—to artist-created window décor, to morning “rallies” where senior executives read a poem or talk about an important Black American as part of the store’s “Black Brilliance” theme, which extends throughout the year.

Positive vision for the future

Dietzway came to Macy’s Boston shortly before COVID-19 led to the closure of many businesses. But she rallied her team and led a strong comeback when Macy’s doors reopened.

She credits her upbringing for her strong work ethic, learned from her father, and a positive attitude, as demonstrated by her mother.

“I think it’s so important as a leader, the need to be genuine, positive, and looking forward, says Dietzway. “Going forward, I think we’re going to be stronger than ever because we know we’re resilient.”