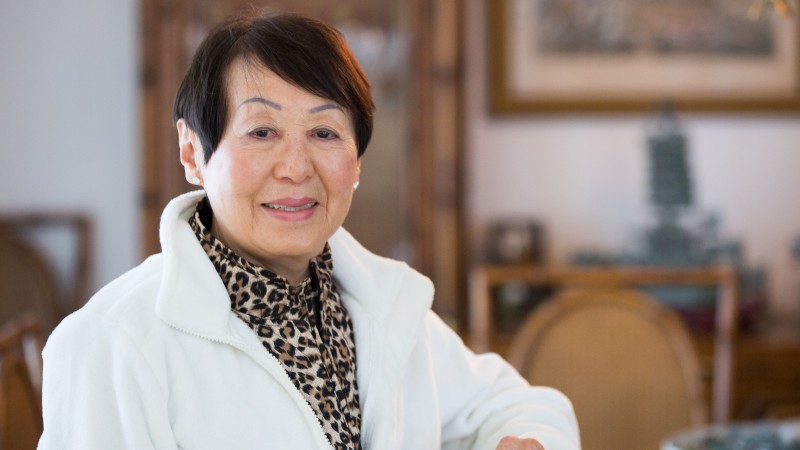 I love Boston; look what it's done for me"

Paving the Way for Women Entrepreneurs

Doris Wong begins each day by meeting friends for a 6 a.m. walk. After hitting the 4-mile mark, this groundbreaking entrepreneur turns her attention to the business she founded more than five decades ago, providing court-reporting services to the legal community.

Since Wong broke out on her own as a court reporter in solo practice, her industry has seen enormous changes in technology, demand, competition, and women’s participation in the workforce.

Wong was a pioneer when she began her business—less than 5 percent of the nation’s businesses were owned by women before the 1970s, according to a report from the Committee on Small Business. But she was following the example of her immigrant parents, who left a farming community in China to seek opportunity in “the land of the free.” They opened a successful laundry in Portland, Maine, while raising a family of eight children.

Wong’s father died when his eldest son, Carroll Goon, was 16. Carroll had to leave school to help his mother keep the business going so the family could remain intact.

“But the teachers from the high school came to the laundry with books and told him to come back in a year when his younger brother could take a turn working at the laundry,” says Wong.

And so the children rotated through the responsibilities of work and education. With the support of their high school, Wong’s five brothers went to college on scholarship, and her brother, Carroll, realized his dream of becoming a physician.

The three sisters also pursued education and careers. One day a client of the laundry suggested that Wong should go to school for stenography. She convinced her mother to shut down the business and move with her to Massachusetts, where she attended the Stenography Institute of Boston.

Wong was eager to become a court reporter, so following graduation she got a job as an office worker at a firm with that specialty and worked her way into a court reporter’s position. Ten years later she opened her own firm, with her younger sister as an early employee. Two nieces—Constance Psaros and Linda Fifield—later joined them and are now principles in the business.

“It’s a team. I started around 1967 on my own and grew over time,” says Wong. ”The company was bigger at certain point, but technology now allows a court reporter to complete in one day what used to take two or three.”

Wong has seen large conglomerates with deep pockets enter the field and lure clients away from peer firms.

“They’ve made it hard for smaller firms like mine to survive,” she says. “In the old days the work just walked into the office, but it’s more of a challenge for anyone starting out today. Even with digital technology, you still have to have a person with the specialized knowledge we provide.”

Changes in technology have shaped Wong’s court-reporting business since she founded it—and even led to a new office location.

“We went from an auto steno machine and typewriter to computer-aided transcripts in the seventies,” says Wong. “It was a big move and a huge learning curve, but we brought the staff along. We’ve kept pace with technology, and we hope our attorneys do as well. They had to be educated.”

Wong bought her office condo at 50 Franklin St. more than 30 years ago when the Milk Street building she was in couldn’t accommodate the HVAC needs of her mainframe computer: The building shut down the air-conditioning at 5 p.m., but her office would often be running until 11 p.m.

The advent of desktop computers eliminated the need for the mainframe, and the lawyers who once were concentrated in walking distance from her office are now spread all over town, but Wong still enjoys her location downtown.

“I love Boston; look what it’s done for me,” she says.

Wong has been involved with the Downtown Boston Business Improvement District from the time it was in its planning stages and served on its Board of Directors for 10 years.

“They came to me and said: This is what we envision to improve the Downtown Crossing area.” Wong was immediately on board.

“Doris has been devoted champion of the downtown neighborhood for many, many years, and her knowledge and experience were invaluable as we were creating the BID,” says BID President and CEO Rosemarie Sansone.

The appreciation is mutual. Says Wong: “The BID has done so much, and it’s a pleasure and an honor for me to be associated with it. Rosemarie is a person who really knows how to get things done as a former city councilor, and she knows how to pick a good team.”

The ways in which the BID partners with city government are of particular interest to Wong.

“If they stay by themselves, nothing gets done, but they work closely with the police, the DPW, and other departments,” she says.

Wong also is a big fan of the Downtown Boston BID Ambassadors and the way their presence has helped to transform downtown by keeping it clean and safe, and she appreciates the beautiful touches provided by seasonal décor and planters.

She says the neighbors respect the BID because it serves not only the business owners, but also all the people who work and live in the neighborhood.

“They look after our interests and are absolutely pricelss,” she says of the BID team. “Everybody in the district is benefiting.”

While Wong continues to do the work she loves, she took a step back 10 years ago. “My nieces, who have been involved forty-plus years, are the ones carrying the office now.”

They join women who now own 40 percent of American businesses, a milestone achieved by following the example of business leaders like Doris Wong.